A short bit about me.

I am a Software Engineer with Intel. I generally work in the area of virtualised telecommunications.

I enjoy everything to do with Computing and Technology.

I have completed a variety of projects a lot of which can be seen on this page, my GitHub and my Thingiverse.

I studied Electronic and Computer Engineering at the University of Limerick in Ireland.

I enjoy Watersports in my spare time.

If you would like more information about me you can check out my Linkedin.

Some of my previous projects. 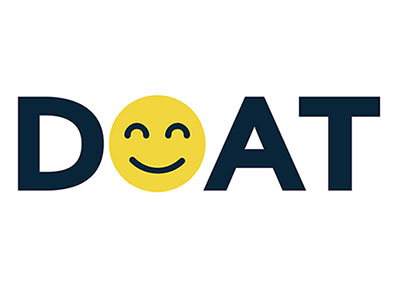 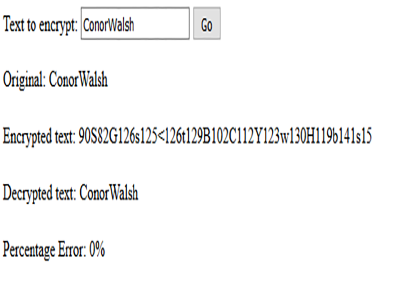 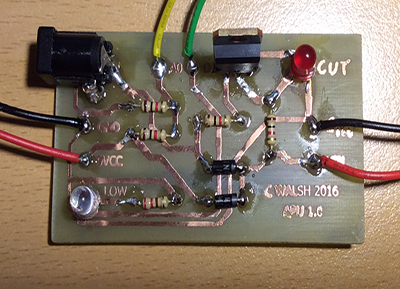 A power unit for an Arduino Microcontroller

Check Out Conor.Engineer
for more Projects

Some of my most notable achievements.

In 2016 I was awarded the Intel Paul Whelan Memorial Scholarship. This is a scholarship offered to students studying Engineering/Technology courses in the University of Limerick by the Intel facility in Shannon, Ireland.

Board of Irish College Societies

In 2018 I was awarded the Best Society Individual in Ireland at the Board of Irish College Societies Awards. This award is given to someone who has contributed massively to a college society in Ireland. I was honoured for my work with the UL Computer Society.

Where you can find me online.

All information is sent directly to and is never shared with any third party.

I use my github account as my online portfolio to showcase examples of my work. All of which are open source and can be used by anyone. The Portfolio can be viwed using the link below. 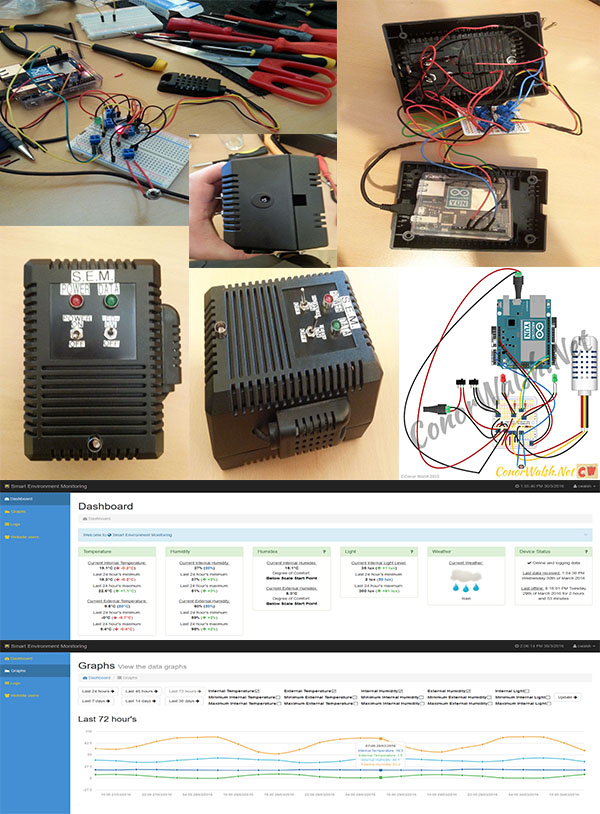 Smart Environment Monitoring system is an Arduino and web based (PHP) system that monitors, records and analyses environmental metrics both inside and outside (using external service) of the room that the Arduino device is located in. 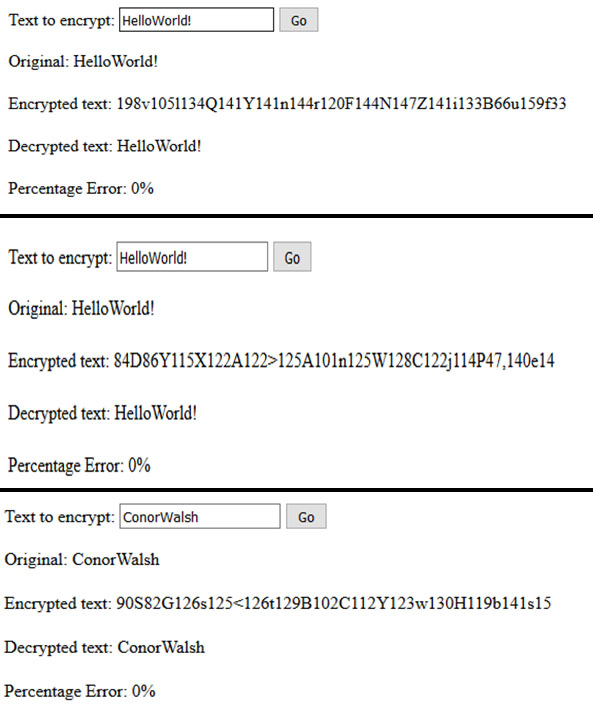 Conor's Obfuscation Algorithm is a way of obscuring data being sent between an Arduino and a webserver. This is useful as most reversible encryption algorithms won’t run on Arduino and the very few that do are extremely slow. This algorithm can obscure most data on an Arduino in 100 to 300 milliseconds (It takes 400 milliseconds for a human to blink).

This project is a power unit for an Arduino Microcontroller. 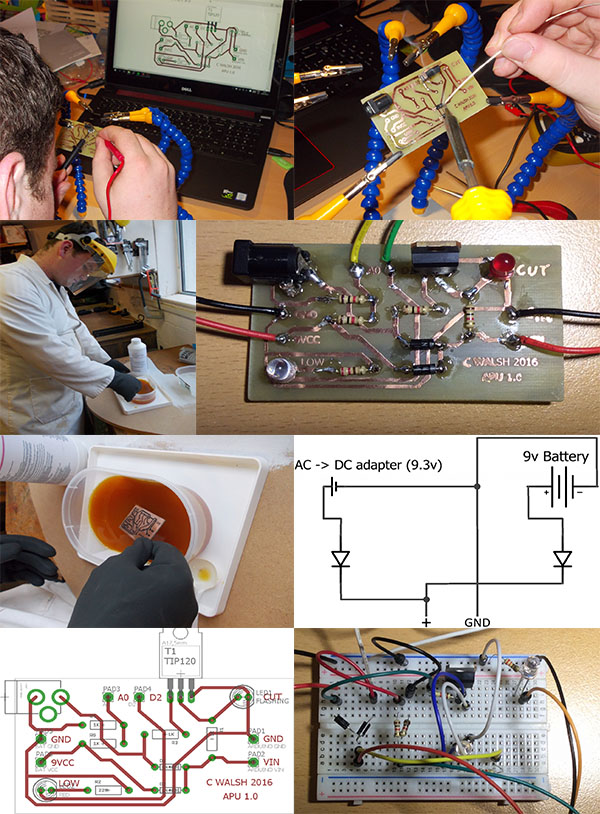 This project is a power unit for an Arduino Microcontroller. The unit is supplied power using a 9V wall adapter and a 9V battery. When AC power is available the unit draws power from the wall adapter, when there is a power cut the unit seamlessly switches to the battery as a power source and back when power is available. During a power cut an LED is lit to alert the user that mains power is not available. There is also an LED to warn the user when the batteries are low.

A track that can calulate the speed of the car. 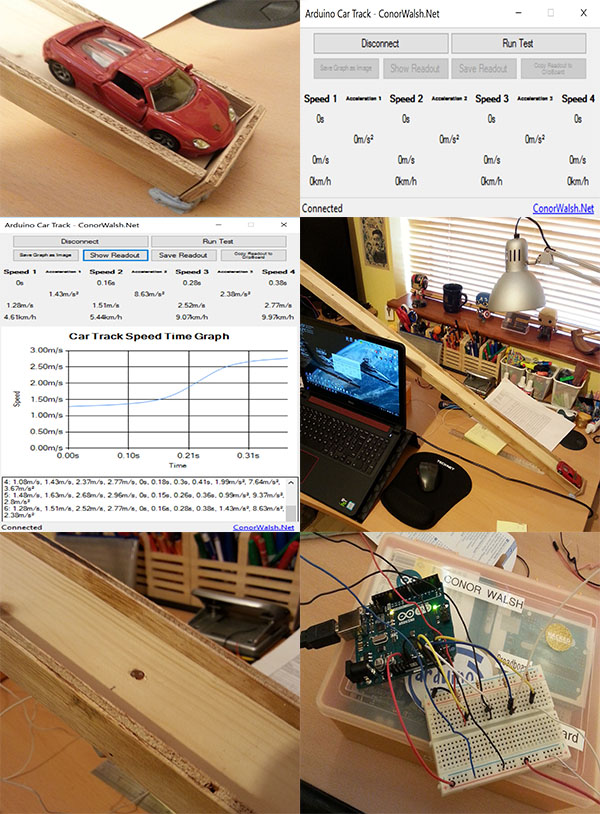 This project is a track that toy cars can race down. An arduino records the speed and times of each car on each run. The Arduino then sends this information to a Windows Application which records the data and draws a speed time graph. The software also calculates the acceleration of the car. The Arduino uses four LDRs and the length of the car to calculate its speed and acceleration. The Arduino uses LDRs to sense the light levels above the track, when a car passes over the sensor the sensor senses that it has gone dark and the Arduino times how long it is dark for. The Arduino then calculates the speed by dividing the toy cars length by the time taken to give the speed in m/s. 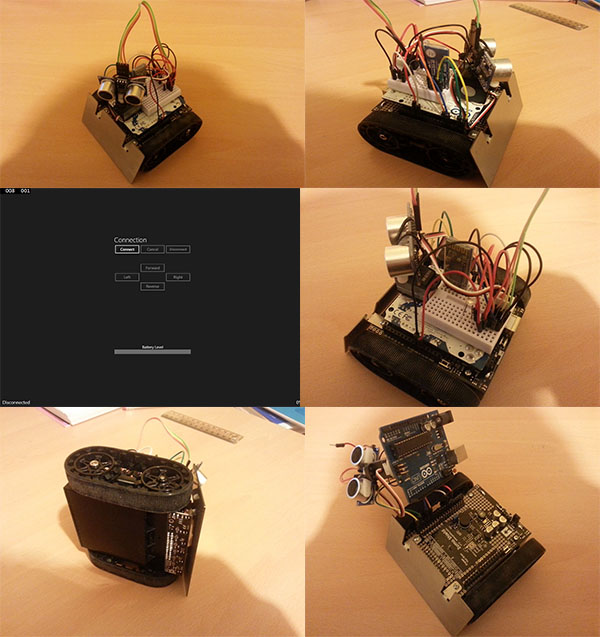 This project is an autonomous car build off a Zumo robotics base that is controlled by an Arduino. The car uses an ultrasonic sensor mounted on an oscillating servo motor to detect obstacles. When an obstacle is detected the car moves back rotates to the right and continues forward until another obstacle is detected. The car can also be controlled by a user using the software shown in the images above. The car communicates with the computer using a Bluetooth radio

DPDK is a set of C libraries for fast packet processing. DOAT (Pronunciation: dōt) is a tool for analysing and assisting in the optimisation of applications built using DPDK. DOAT is an out of band analysis tool that does not require the DPDK app to be changed. DOAT was developed in partnership with Intel for my Final Year Project as part of my engineering degree.